At a glance
Executive Board
Advisory Board
Compliance
Value Management

SIGNA Prime Selection AG owns a portfolio of exclusive real estate properties in prime inner-city locations in Austria, Germany, Switzerland and Northern Italy. The vast majority of these extraordinary real estate objects will remain in the hands of SIGNA Prime in the long term. The company continues to supplement its real estate investments with acquisitions and projects in top locations with significant value appreciation potential on an ongoing basis.

With a focus on New York City and other prime inner-city locations in the US and a mixture of different utilisation types focused on sustainability, SIGNA RFR US Selection AG will acquire trophy assets with value enhancement potential in unique locations. The long-term buy-and-hold strategy will result in a core portfolio similar to SIGNA Prime.

One part of SIGNA Premium is The KaDeWe Group, the best-known premium and luxury department store group in the brick-and-mortar retail sector in Germany with three premium department stores, the KaDeWe in Berlin, the Oberpollinger in Munich and the Alsterhaus in Hamburg. In addition, the traditional Swiss department store chain GLOBUS has been a part of SIGNA Premium since the spring of 2020. At the end of 2021, SIGNA and CENTRAL GROUP signed the acquisition of the Selfridges Group, one of the most iconic brands in the global luxury retail industry.

As the largest sports e-commerce platform in the bike, tennis, outdoor, team sports and athleisure categories, SIGNA Sports United (listed on the New York Stock Exchange) currently operates around 80 web shops in 17 countries. With around seven million active customers and over 500 million website visitors per year, the company is the clear number one for Europe’s sports fans.

GALERIA is Germany’s number one department store chain and number two in Europe. The company has prime in-demand, inner-city locations across all relevant cities in Germany and is thus located in close proximity to approx. 80% of the German urban population.

The kika/Leiner furniture store chain was acquired in June 2018 and is an integral part of SIGNA Home & Lifestyle. With its over 40 stores, this traditional company is seen as one of the major players in the industry and is expanding through strategic renovations and new openings.

Wolfram Keil has been a member of the SIGNA Group Executive Board and Group CFO since 2013. Prior, he worked for Cerberus Germany and Terra Firma Capital Partners in London, where he gained extensive experience in the private equity and real estate business. After completing his university studies, Wolfram Keil began his professional career in the financial sector at Procter & Gamble.

Christoph Stadlhuber is Member of the SIGNA Group Executive Board, Managing Director of SIGNA Holding GmbH and Member of the Supervisory Boards of SIGNA Prime Selection AG and SIGNA Development Selection AG. He started working at SIGNA in 2011 and is supporting all real estate activities in Austria with his strong network and years of real estate experience. He completed his studies in Spatial Development and Planning at the Vienna University of Technology. Among other positions, he was Chef de Cabinet of the Austrian Federal Minister of Economics and Labour, Dr. Martin Bartenstein. From 2003 to 2011, he was Managing Director of Bundesimmobiliengesellschaft m.b.H.

Timo Herzberg has been working for SIGNA since the beginning of 2017. As CEO of SIGNA Prime Selection AG and SIGNA Development Selection AG, he is responsible for and manages all real estate activities in Germany, Austria, Switzerland and Italy. He is also a member of the Supervisory Board of SIGNA RFR US Selection AG. Timo Herzberg has been a member of the SIGNA Group Executive Board since December of 2018. He can look back on over 20 years of experience in the real estate investment and development business with national and international as well as private and institutional real estate investors. In 2006, he founded the Signature Capital Group Germany, which he led as Director and Managing Director.

Michael Cramer has been a member of the SIGNA Group Executive Board since October 2020 and is responsible for SIGNA’s strategic communications both internally and externally as well as the company’s strategic marketing. He has been one of the most prominent figures in the communications industry for many years. As a journalist, he was a Middle East correspondent, programme director and editor in chief at various TV stations at quite a young age. His company, altcramer gmbh, has been consulting a virtual “Who’s Who” of the German business and top political arenas for a decade.

The strategic Advisory Board consists of eminent figures from the banking, political and business arenas, is constantly driving force in the further development of SIGNA and acts as counsel to the Executive Board. The Advisory Board, first established in 2005, is not a statutory body in the conventional sense, but rather a body whose task it is to advance the strategy and further development as well as new business activities of the group.

What they all have in common is strong ties to SIGNA as well as many years of experience and know-how in their respective areas of activity.

René Benko is the founder of SIGNA Group and Chairman of the Advisory Board of SIGNA Holding GmbH.

Dr. Alfred Gusenbauer was Austria’s Chancellor. After leaving the political arena, he accepted several selected Supervisory Board mandates, including Chairman of the Supervisory Board of STRABAG, one of Austria’s largest construction groups, as well as SIGNA Prime Selection AG, SIGNA Development Selection AG and SIGNA RFR US Selection AG. Since the 2009 winter semester, he has also been a Visiting Professor at the US Ivy League Harvard University. Alfred Gusenbauer is regarded as an expert in the areas of foreign, security and economic policy. He has been awarded several prestigious national and international prizes.

Dr. Karl Stoss holds a Doctorate in Business Administration. At the beginning of his career, he was a partner at the MZSG – Management Zentrum St. Gallen – as well as a lecturer at the University of Innsbruck. In 1997, he became Deputy Chairman of the Board of Österreichische Postsparkasse AG, and in 2001, he joined the Board of Raiffeisen Zentralbank AG. In 2005, he became CEO of Generali Versicherung AG. From 2007 until the end of 2017, Karl Stoss was CEO of Casinos Austria AG, and he was elected President of the Austrian Olympic Committee in 2009.

Günter Koller began working as an attorney at the commercial law firm BEITEN BURKHARDT MITTEL & Wegner in 1994, where he specialised in real estate and banking law. In 1997, he joined with several colleagues to found GSK, a law firm specialising in real estate, banking and finance law. He left the firm in mid-2001 and became Managing Director of Wilhelm von Finck Hauptverwaltung GmbH, Munich. The family office supports Wilhelm von Finck and two other wealthy clients with regard to all asset management matters except for financial services. Günter Koller is the Deputy Chairman of the Supervisory Board of Quantum Immobilien AG, Hamburg and Isarklinik AG, Munich, and he is a Member of the Supervisory Boards of Accumulata AG, GIEAG, Hammer AG, all in Munich, and 6B47 Real Estate Investors AG in Vienna. He is also a Member of the Advisory Board of Paramount REIT PGRE, New York.

Prof. Dr. h.c. Roland Berger is regarded as the Grand Seigneur of the international consulting sector. In 1967, he founded Roland Berger Strategy Consultants, of which he is the Honorary Chairman to this day. He is a Member of several Supervisory and Advisory Boards. His Roland Berger Foundation awards the annual Roland Berger Human Dignity Award and sponsors talented children from socially disadvantaged families as they work towards studying at a university.

Dr. Susanne Riess-Hahn can look back on many years of political experience. She was sworn in as Vice Chancellor of the Federal Republic of Austria in 2000. Following her departure from the political arena, Ms Riess-Hahn has been CEO of the Austrian Wüstenrot Bausparkassen- und Versicherungsgruppe since 2004, and she also sits on numerous supervisory boards, such as the General Council of Oesterreichische Nationalbank.

Walid Chammah was Chairman of the Board of Directors of Morgan Stanley International and a Member of the Management Board and the Operating Committees. Between September of 2007 and December of 2009, Mr. Chammah was Co-President of Morgan Stanley and was responsible for the institutional securities business until he resigned from this function in January of 2012. Since that time, he has held numerous consulting mandates in various international companies.

Dr. Karl Sevelda has over 40 years of experience in the banking sector. He worked at Creditanstalt-Bankverein for over 20 years before joining Raiffeisen Bankengruppe in 1998, where he was responsible for RZB’s corporate customer business until 2010. Between 2010 and 2013, he was Deputy Chairman of the Managing Board of Raiffeisen Bank International (RBI), and from June 7, 2013, he was its Chairman until 2017. The merger of RBI with its parent company RZB was completed towards the end of Dr Sevelda’s term of office, resulting in structural improvements and increased transparency.

Karl Samstag was a Member of the Board of Directors from 1991 to 2002, and from 1995 onward he was Deputy Chairman of the Board of Directors of Bank Austria Creditanstalt, which he chaired between 2003 and 2004. Since then, he has sat on supervisory boards in various companies, including Unicredit Bank Austria, VAMED, Oberbank, Bank für Tirol und Vorarlberg, and PORR.

SIGNA is one of Europe’s most important real estate investors and operates a number of reputable commercial concerns. SIGNA also owes this success story, which started in 2000, to its reputation of conducting business based on ethical and performance-related core values. SIGNA is fully committed to the principles of a modern compliance structure which, in addition to adhering to all legal requirements, includes compliance with internal and external guidelines and consideration of fundamental ethical values.

To this end, SIGNA has established a Compliance Management System (CMS) containing clear rules regarding conduct that is and is not permitted at SIGNA. In order to warrant the quality assurance of this system, SIGNA Holding GmbH has aligned its CMS with the requirements and contents of ISO 37301:2021, and it was the first company in the SIGNA Group to undergo an audit for certification of the delimited sub-areas of Anti-Corruption, Donations & Sponsoring as well as KYC & AML in accordance with ISO 37301:2021. KPMG Advisory GmbH completed this audit for SIGNA Holding GmbH (FN 191343 m) with a certificate dated May 27, 2022.

The values of integrity, responsibility, fairness, compliance and transparency are the yardstick by which SIGNA takes action. They form the basis of the company’s long-term success and are an indispensable compass in the way we deal with one another. With its Value Management System, SIGNA commits itself to acting with ethical integrity, adhering to internationally recognised social standards and taking into account ecologically and socially relevant aspects in its day-to-day activities. The Code of Conduct for Business Partners contains SIGNA’s expectations and requirements for business partners to adhere to basic ethical principles and to operate in a sustainable manner. 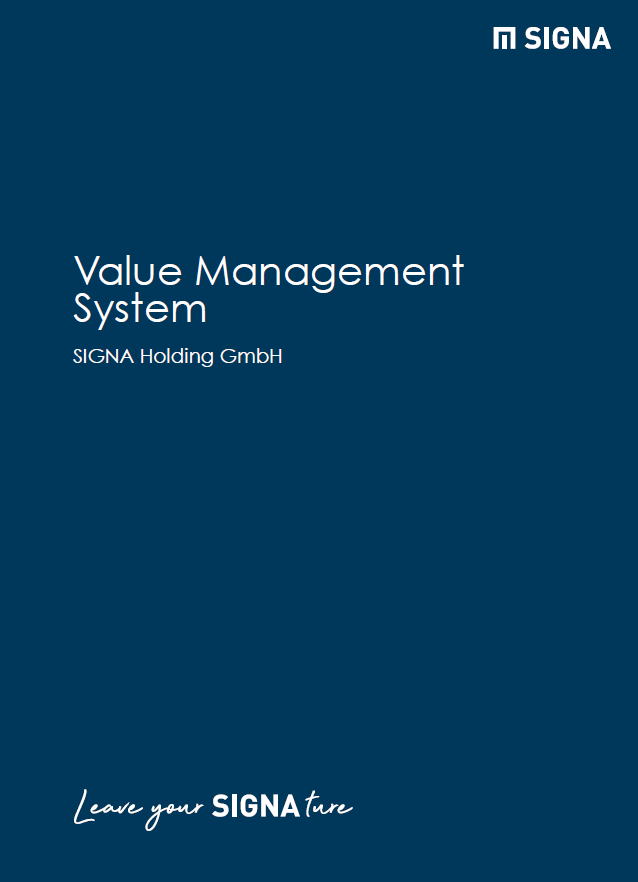 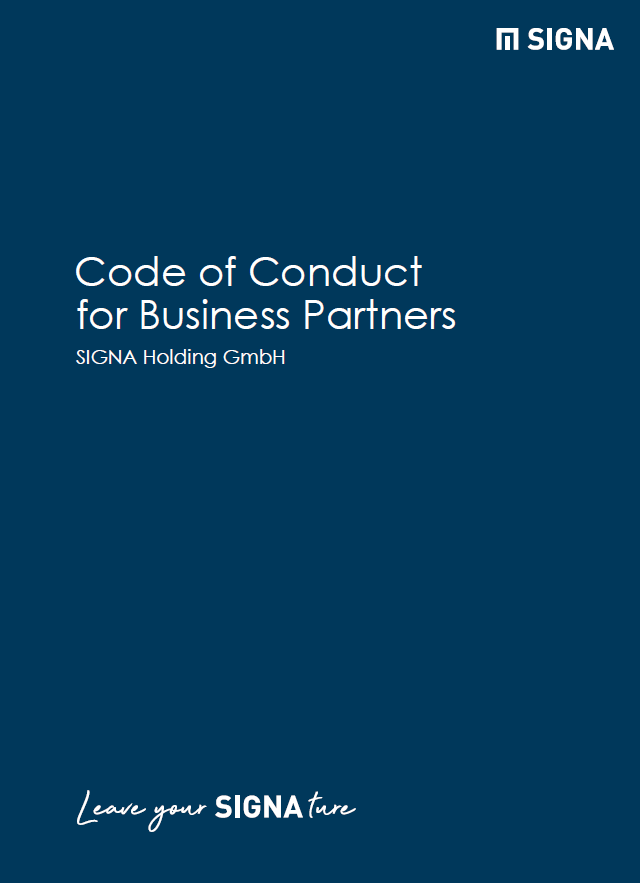