Prestigious international architectural firm O.M.A. – Office for Metropolitan Architecture wins architecture competition for the KaDeWe project in Vienna+++ SIGNA & Central Group develop a modern version of the traditional department store as a place to meet with a mix of shops, restaurants and hotel facilities and public, non-consumption-oriented zones +++ Project planned to be completed by autumn 2023 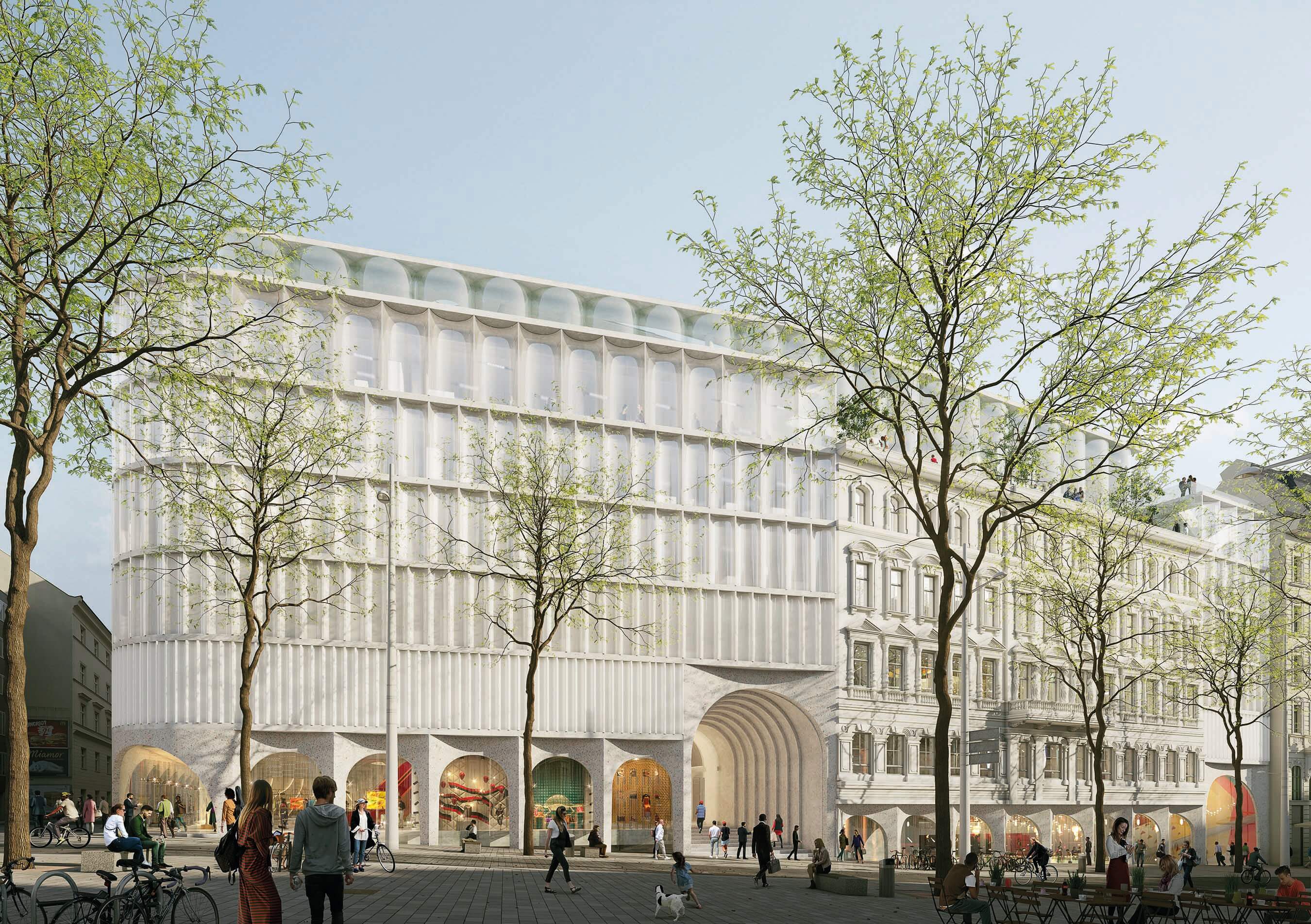 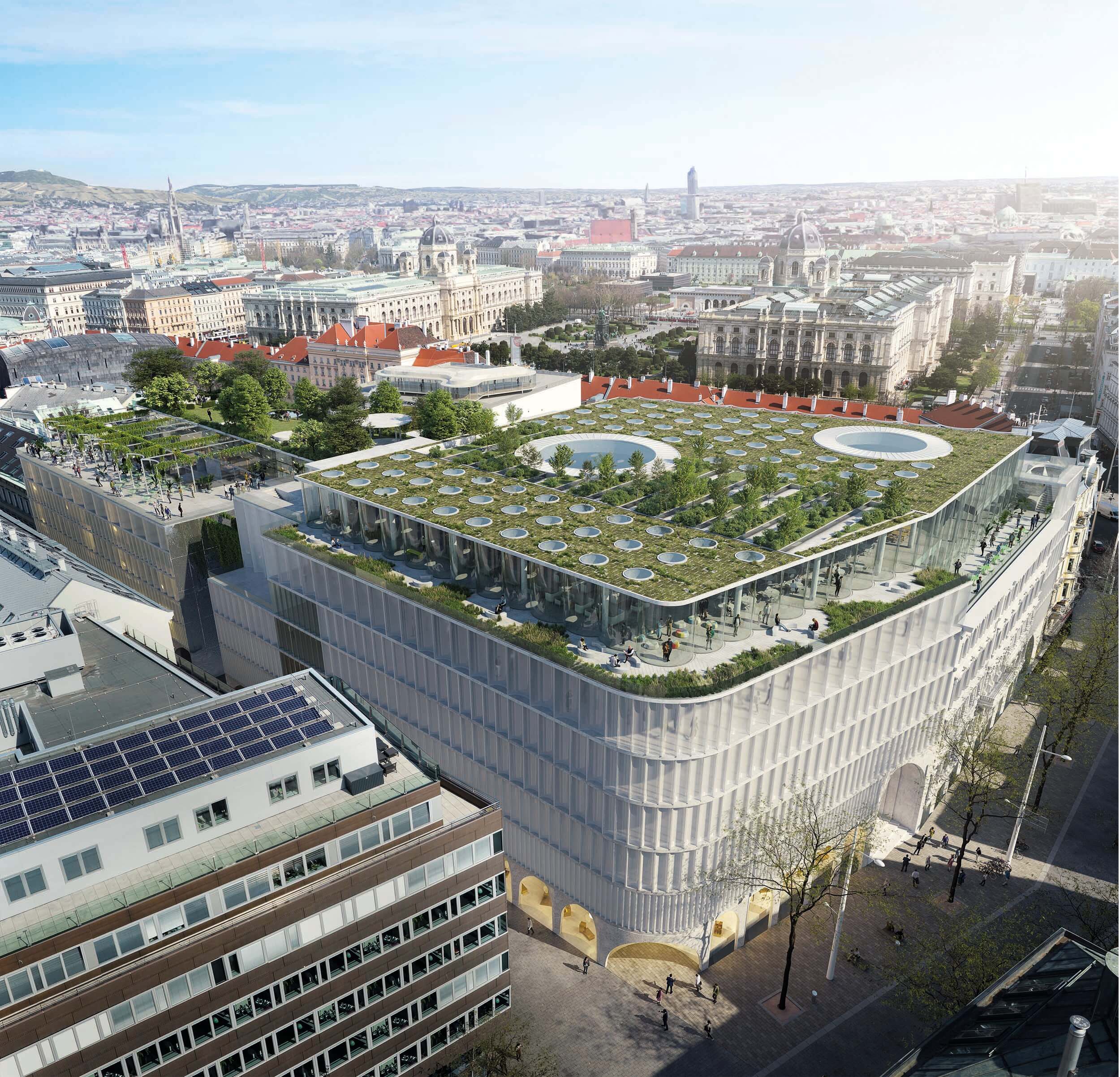 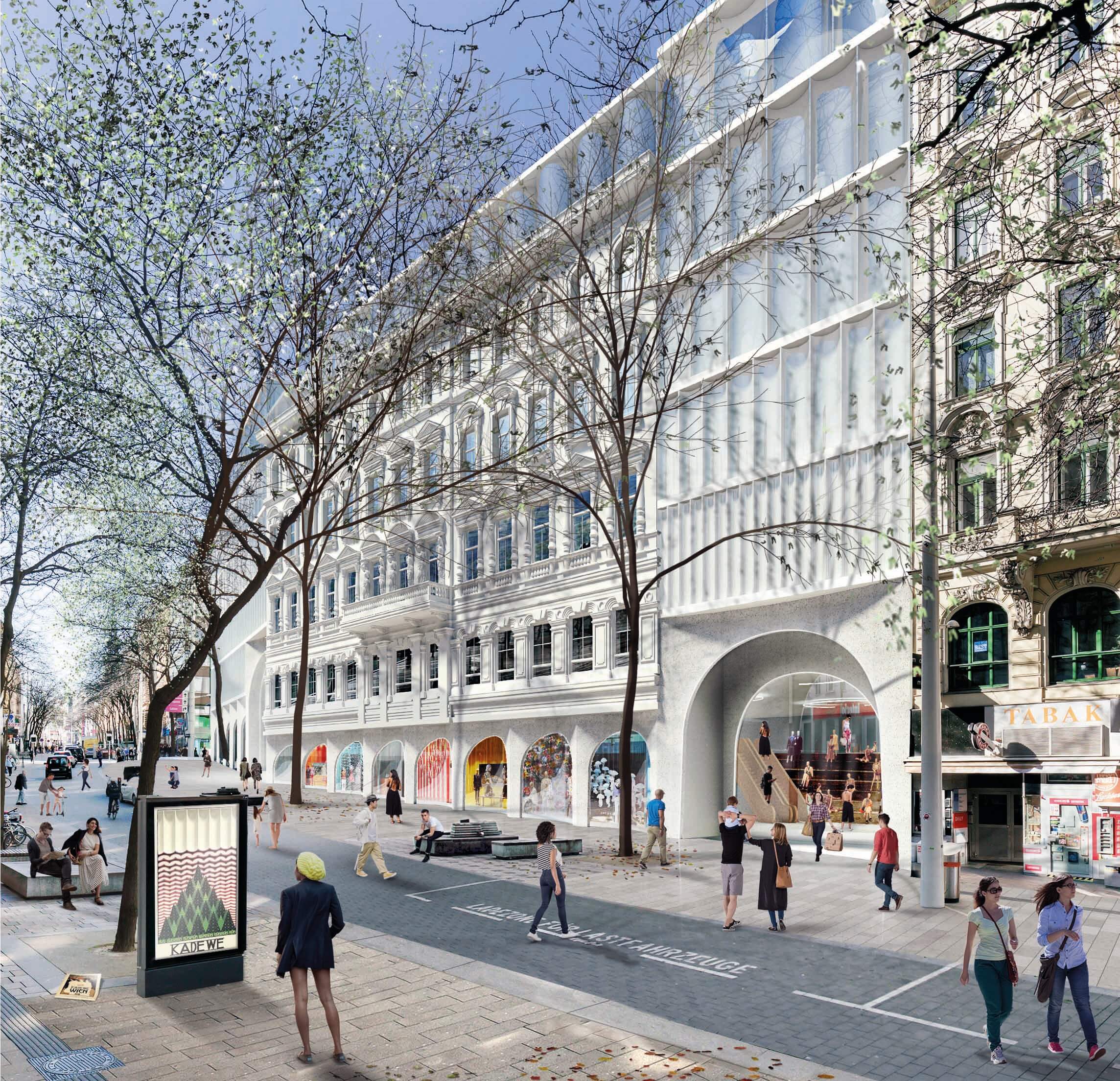 Vienna, October 2, 2019 – The prestigious international architectural firm O.M.A. –Office for Metropolitan Architecture, founded by Pritzker Prize winner Rem Koolhaas, was selected as the winner of the architecture competition for the KaDeWe project in Vienna. A modern version of a traditional department store with a mix of shops, restaurants and hotel

facilities and public, non-consumption-oriented zones will be constructed at the site currently occupied by the Leiner store. This exceptional project sends a strong signal for the future of bricks-and-mortar retail trade.

A specialist jury consisting of experts from the areas of architecture, retail and project development as well as representatives of the city of Vienna and the 7th district has unanimously selected the project by the Dutch architectural firm as the winner. The winning design for Vienna’s most outstanding inner-city project was presented at today’s press conference with the winning architectural firm O.M.A., Elke Delugan-Meissl, Chairwoman of the Jury, and Christoph Stadlhuber, CEO of SIGNA Real Estate Austria.

Ippolito Pestellini Laparelli and Ellen van Loon, O.M.A. – Office for Metropolitan Architecture: “The value of department stores should be measured by their ability to engage the local context. We are very excited about the opportunity to work in the historical heart of Vienna, and with this project we intend to highlight its qualities. The building is not an icon, but rather an architectural device that establishes new urban connections and public spaces through its own internal organisation.”

Elke Delugan-Meissl, Chairwoman of the Jury: “The project is a unique opportunity for the neighbourhood. Its location at the interface of the first district and the cultural museum quarter will inject fresh vitality. The hybrid usage is a great opportunity to redefine Mariahilfer Strasse as a shopping street. With its programmatic approaches, the winning project shows many possibilities for implementing a future-oriented project.

Vittorio Radice, Executive Chairman of the La Rinascente and KaDeWe Group: “This landmark project offers us as the KaDeWe Group the unique opportunity to reinterpret the department store of the 21st century in a visionary way at this unique location. At this site we will create a meeting place for the residents of Vienna and international visitors that invites people to stroll, linger and consume. Architecture, restaurants and of course the wonderful roof park with a view over the city of Vienna will create a unique experience, a whole world of experience for the visitors. This project is therefore also a statement for the future and the further development of bricks-and-mortar retail which we stand for and of which we are firmly convinced.”

Christoph Stadlhuber, CEO of SIGNA: “We are delighted with the re-establishment of this traditional department store on one of Vienna’s most interesting and exciting squares. We are convinced that the project will generate additional impulses in the district and the city and be seen as a unique landmark. SIGNA stands for high-quality, sophisticated architecture on the cutting edge of our times. It is our wish that the winning architectural design will form an integral part of the cityscape. The plans presented by O.M.A. today show that the new building fully meets these demands. We are particularly proud that the prestigious firm of Pritzker Prize winner Rem Koolhaas will now, for the first time, design a building for us in Austria!“

The design “The Link” is a strategic response to the necessity to connect and link the new building complex to the city by offering a series of vibrant public and commercial spaces. The ensemble was divided into two main components: the department store in the front and the hotel in the rear. “The Link” is designed to be open and permeable. It will offer spaces to rest and walk through on all levels, making it both public and intimate at the same time, while connecting to the surrounding neighbourhood in an osmotic relationship with the city and its users.

Mariahilfer Straße is the largest and one of the most heavily frequented shopping streets in Austria. It is an impressive site due to its central location within the new traffic-reduced area, its immediate vicinity to Vienna’s inner city and the first-class connection to the public and private transport network. Around 1900, elegant department stores dominated this boulevard. The “Esders” department store on Mariahilfer Straße 10-18 (currently occupied by the Leiner store) was one of the most magnificent of its kind. It is at this very spot and in pursuit of this tradition that a new department store of the KaDeWe Group will be constructed by autumn 2023. The start of construction is planned for the first half of 2021.

The existing building consists of three parts built in different years with a total usable floor space of about 58,000 m2 as well as an underground parking garage with 327 parking spaces. After construction of the property is completed, the KaDeWe Group will be the main tenant with a long-term rental contract. The new department store will send a strong signal regarding the future of bricks-and-mortar retail trade. The planning includes a mix of tenants with premium goods, products for day-to-day needs and local fashion labels. On the rooftop, visitors will have access to upscale restaurants and a publicly accessible roof park with a view of the city. This area spanning around 1,000 m2 is planned as a non-consumption-oriented public access area and will be accessible outside of the stores’ and restaurants’ opening hours. The project also includes a hotel with 150 to 165 rooms.

The innovative, traditional department store is intended to bring new life to the neighbourhood and enhance the lower part of Mariahilfer Straße by creating a unique department store experience for Vienna’s residents and tourists alike.

The fundamental criteria for the project were sustainability, future-oriented utilisation and architectural distinctiveness. Special attention was to be paid to the prominence of the location, its significance as a meeting zone for all Vienna residents and the identity of the urban development. The fundamental vision is a resurrection and reinterpretation of the traditional department store. In close coordination with the city of Vienna, SIGNA proactively started a multi–level competition process with four renowned international architectural firms – O.M.A. – Office for Metropolitan Architecture, BIG Bjarke Ingels Group, Snøhetta and Hadi Teherani architects – in May 2019.

Presentation of the Architecture Competition

In the mumok Hofstallung, Museumsplatz 1, 1070 Vienna

Renderings: all images can be used free of charge as long as copyright message is included © OMA

With a current project volume of € 9 billion spanning 10 locations in Austria, Germany, Italy, Switzerland and Luxembourg, the SIGNA Group is one of the most significant real estate developers. It is one of the dominant investors in the attractive real estate markets of Vienna, Berlin, Munich and Hamburg. At the beginning of 2019, the SIGNA Group decided to expand its real estate activities to the US market, and it acquired the legendary Chrysler Building in New York.

Central Group is a multi-national retail, real estate and gastronomy group that is present primarily in Thailand, Vietnam and Europe. Central Retail is active in many retail formats and categories in the food and non-food areas and operates several brands, including Supersports, the leading sports retailer in Thailand and Vietnam. Central is the leading developer and operator of shopping centres and department stores in Thailand and Vietnam and continues to expand its presence in Southeast Asia. Since 2011, Central has also owned La Rinascente, Italy’s most successful operator of premium and luxury department stores, including sites in Rome, Milan, Turin and Florence.

Since June 2015, the Central Group/La Rinascente has jointly owned the KaDeWe Group together with SIGNA and operates Germany’s leading luxury department stores: KaDeWe in Berlin, Oberpollinger in Munich and Alsterhaus in Hamburg.

O.M.A. is an international practice operating within the traditional boundaries of architecture and urbanism. AMO, a research and design studio, applies architectural thinking to domains beyond this.

O.M.A.-designed buildings currently under construction include Taipei Performing Arts Centre, the Axel Springer Campus and the renovation of the Kaufhaus des Westens (KaDeWe) in Berlin, the RAI NHow Hotel in Amsterdam, the New Museum for Western Australia in Perth, a new building for Brighton College, The Factory Manchester and Prince Plaza in Shenzhen.