Evenings to feature a big screen projection to celebrate Robert Harting's last big appearance at the European Athletics Championships home in Berlin +++ From 31 July to 8 August, every evening from 10:30 p.m. to midnight, on the façade of the UPPER WEST, Kurfürstendamm side 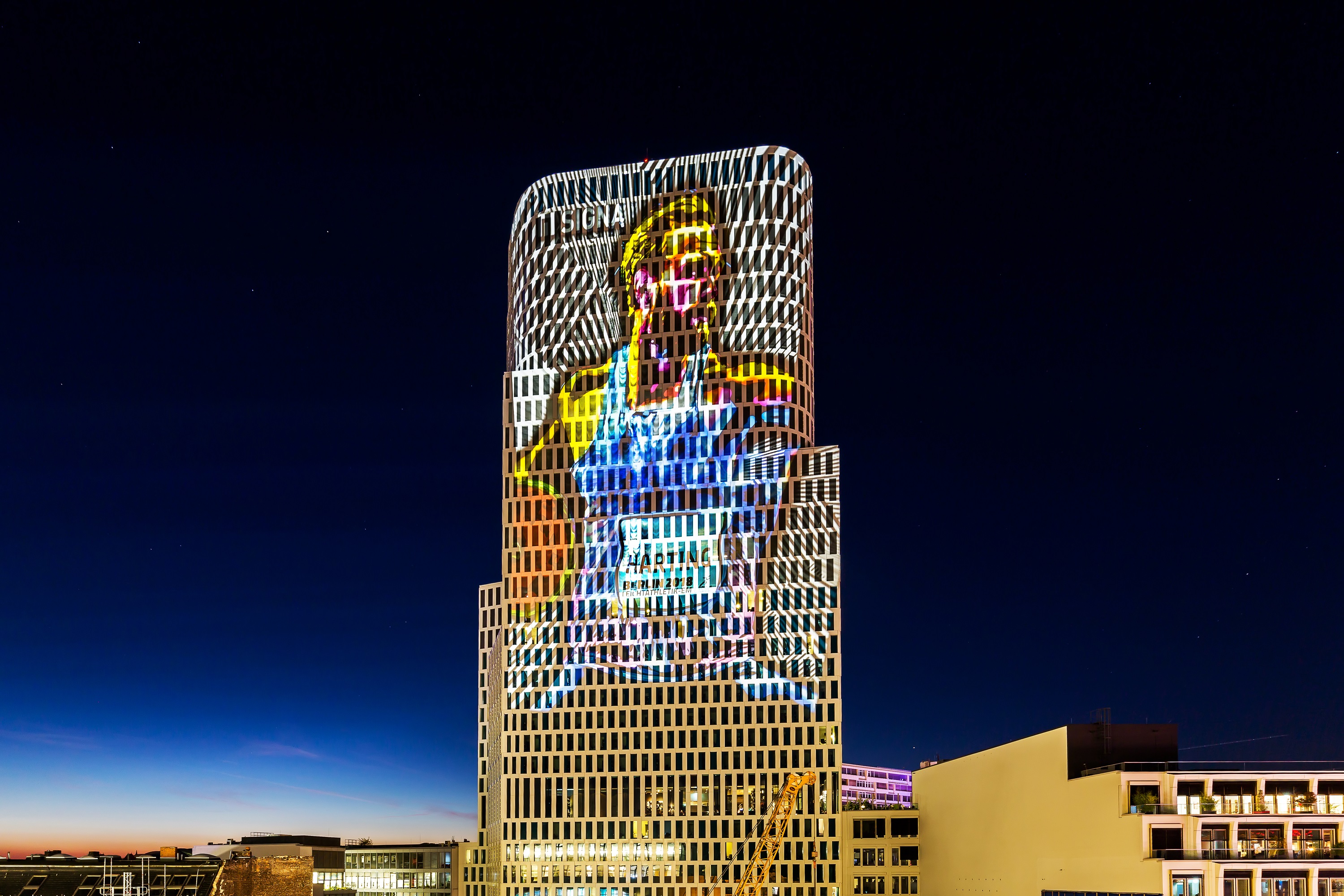 Berlin, 31 July 2018 – A spectacular art event to start on 31 July at 10:30 p.m. on the UPPER WEST in Berlin: A projection of discus throw Olympic champion Robert Harting as an XXL work of art in street art design.

“These are Robert Harting’s last European Championships in his home town of Berlin. We want to support and show our appreciation for the finale of a great career by this exceptional Berlin athlete with a very special art event”, says Birgit Zander, director of the Festival of Lights, who thought up this initiative and is co-sponsoring it.

The SIGNA Group, as the owner of UPPER WEST, is also a partner. Additional supporters include Karstadt at the Kurfürstendamm, Motel One Berlin-UPPER WEST, BTR Profisport GmbH and the Berlin European Athletics Championships 2018 GmbH. Frank Kowolski, head of the European Championships and Berlin 2018 CEO said, “The light installation pays homage to the most successful German athlete of the last ten years. Robert Harting is an extraordinary personality and an athletic figurehead for the sports metropolis of Berlin. It is an impressive message from the European Athletics Championships to all Berliners to follow their sports hero during his last international competition”.

The three-time world champion, two-time European champion and London Olympic champion Robert Harting is very proud and happy to represent a beacon of light for the sport.

On 8 August, the final of the men’s discus championship will be held at the European Championships, which will be the last championship competition that Robert Harting will participate in. With a “Goodbye Robert Harting” motif, the artistic large-screen projection will be displayed one last time on the UPPER WEST. The motifs were created by the group of artists of the Festival of Lights.

The European Athletics Championships will take place until 12 August 2018. More info at www.berlin2018.info

The SIGNA Group is a completely privately managed industry holding company active in the real estate and retail sectors. The company is one of the most important real estate investors in Europe, with more than EUR 12 billion in real estate assets and an additional development volume of around EUR 8 billion. With more than 25,000 employees and more than EUR 4.5 billion in sales, it operates well-known retail companies. The Group has two central core business sectors; SIGNA Real Estate and SIGNA Retail .

The SIGNA Retail Group includes the four independent retail platforms SIGNA Department Store Group, SIGNA Premium Group, SIGNA Sports United and SIGNA Food & Restaurants Group, which have around 200 locations in the best city centres and more than 100 online store in 20 countries, contributing to the strong growth of the SIGNA Retail Group in Europe. The focus is on the consistent further development of the omni-channel strategies of the individual commercial platforms. More info at www.SIGNA.at.