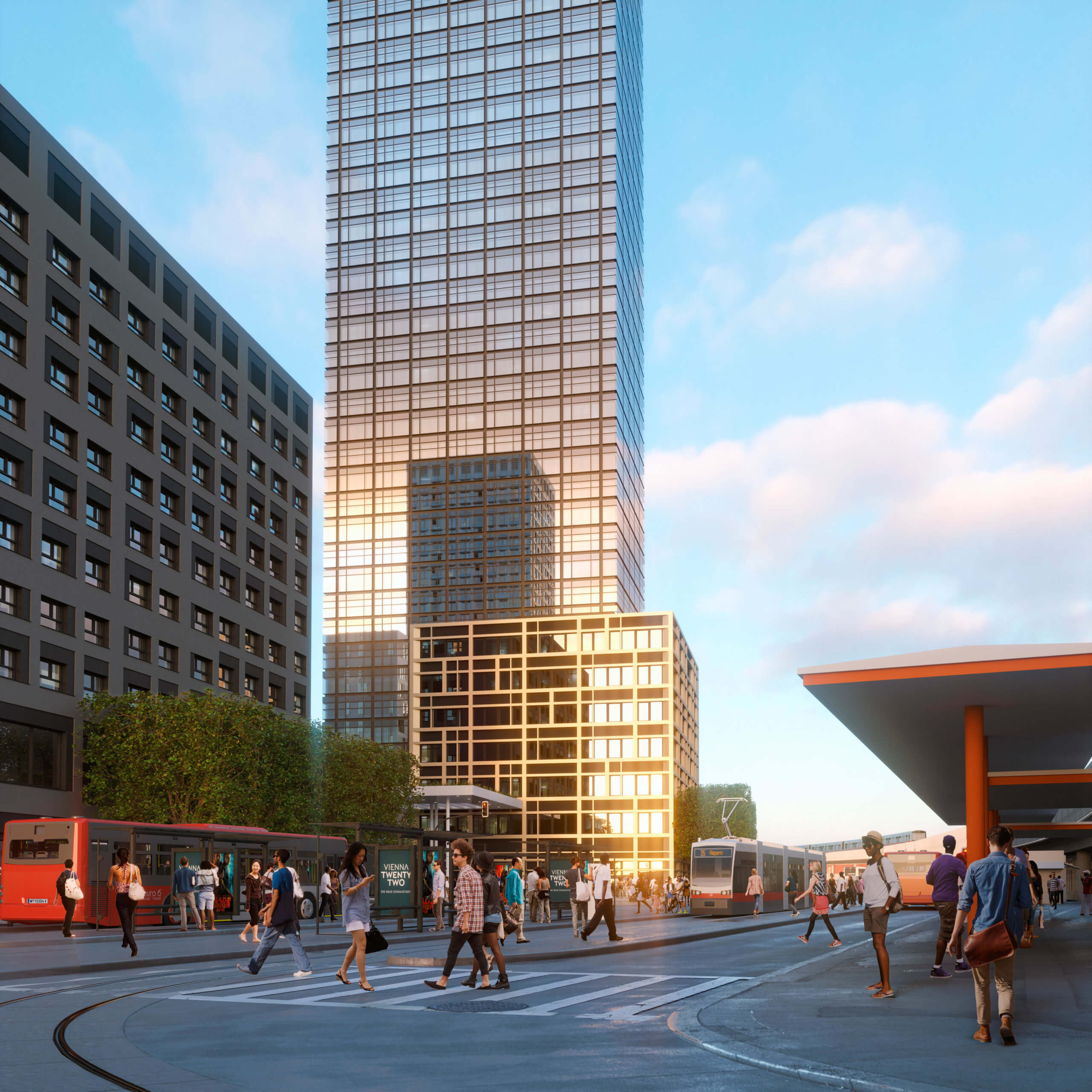 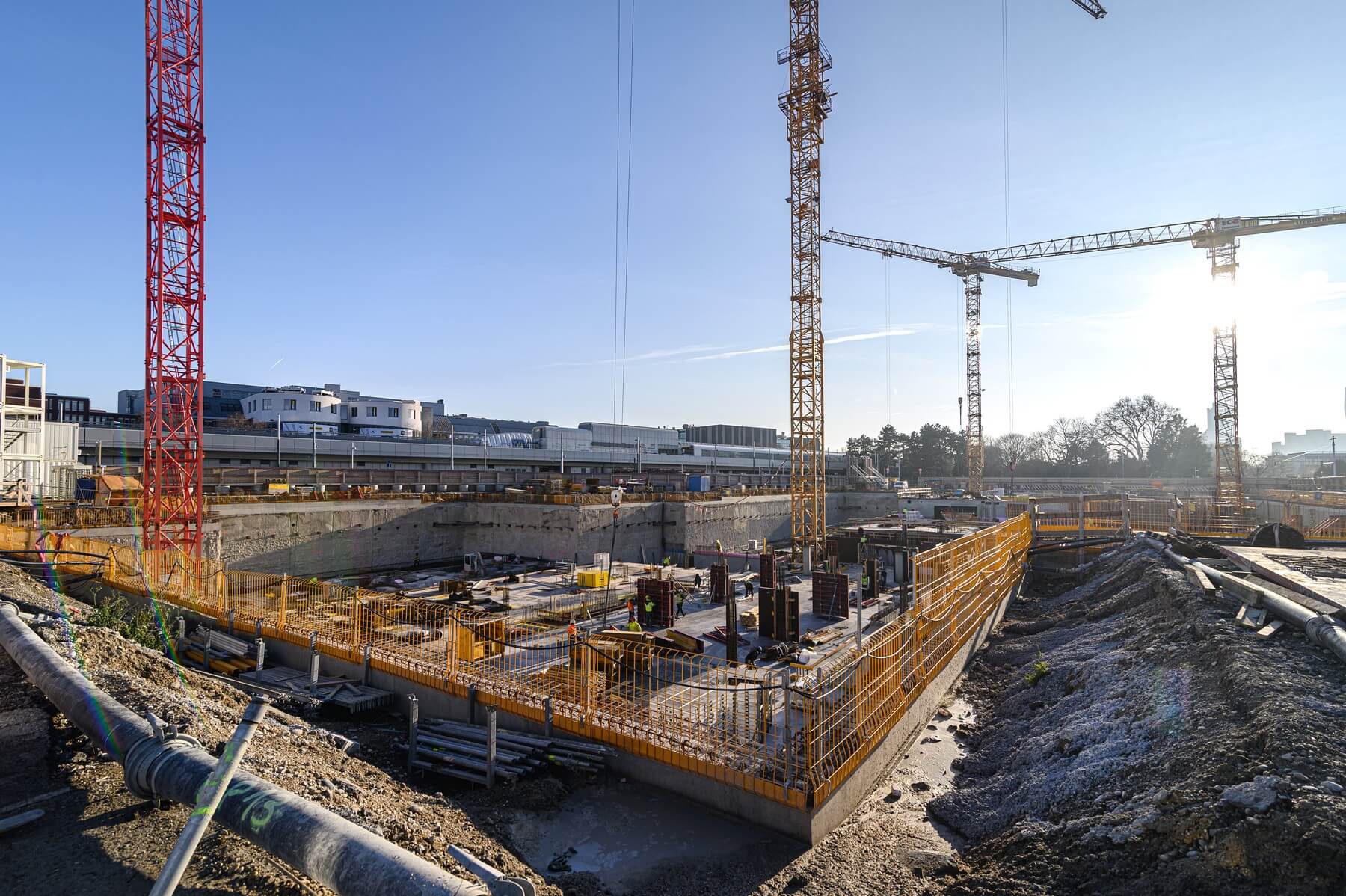 Vienna, January 31, 2020 – It’s official! In time for the start of the construction of the high-rise building, the rental agreement between the construction and building management of the city of Vienna and the project developers SIGNA/ARE for an office building in the VIENNA TWENTYTWO quarter was recently approved by Vienna’s city council. This will provide a modern contact and service point for many official applications and concerns for the residents of Vienna’s largest district (in terms of area). In future, local residents can register their official address and collect their passports there.

After its completion in 2022, the eight-floor building with a floor-space of approx. 4,500 m2 in the VIENNA TWENTYTWO urban development area will also offer plenty of room for romance. In addition to the district administration and the municipal district offices, the civil registry office will be housed in a section that currently carries the simple working title “Part IV”.

“After yesterday’s approval by the local council, the path is clear for the move in just over two years. If everything goes according to plan, the political control of the district will be located in VIENNA TWENTYTWO in mid-2022, and it will also be the centre for many modern administration services. With VIENNA TWENTYTWO, we and our partner are implementing one of Vienna’s largest urban development projects at a central hub in the north of the city,” says  SIGNA’s CEO Christoph Stadlhuber.

“The rental of part of VIENNA TWENTYTWO to the district administration, the municipal district office as well as the registry office is an additional confirmation of the quality of this urban district. The ideal location, the optimal traffic connections, the future gastronomy and local shopping opportunities as well as the appealing atmosphere offer optimal conditions not just for modern living but also for an attractive workplace,” says Hans-Peter Weiss, ARE’s Managing Director.

“VIENNA TWENTYTWO is a project that meets all the demands of modern city centres – it meets high functional and aesthetic standards and will be an enrichment for Kagran and Donaustadt as a whole,” says district chairman Ernst Nevrivy.

The 32 metre high office complex is part of a modern building ensemble planned by Delugan Meissl Associated Architects, comprising six components and a connecting ground floor zone at a central hub in the north of Vienna. It has a broad utilisation mix of residential, office, hotel, catering and demand-oriented local shopping offers. The project, located opposite the Donau Zentrum and the Donau Plex as well as the Erste Bank Arena, has a total floor-space of 15,000 m². After their completion in 2023, the buildings will reach heights from 27 to 155 metres. In future, a total of 600 apartments – both rented and owned – will be available to residents.

VIENNA TWENTYTWO meets the new demands for urban districts and offers a synergetic utilisation mix. The project also scores points with regard to sustainability. Vienna TWENTYTWO’s energy system is designed to use as few resources as possible. Component cooling and the use of groundwater heat contribute significantly to the project’s great environmental friendliness. VIENNA TWENTYTWO already has a pre-certificate for the ÖGNI Gold district certification. For the office building, LEED certification is also being sought.

After the completion of earthworks and civil engineering work, construction work is currently underway in the basements. The floor plates are being set in concrete, followed by formwork, reinforcement and concreting of walls, columns and ceilings. The construction of the upper floors will begin in March.

With a current project volume of 9 billion euro spanning 10 locations in Austria, Germany, Italy, Switzerland and Luxembourg, the SIGNA Group is one of the most significant real estate developers. The company is one of the dominant investors in the attractive real estate property markets in German-speaking cities. In close cooperation with local authorities, SIGNA Real Estate focuses on sustainable urban development, future-oriented utilisation concepts and unique architecture. At the beginning of 2019, the SIGNA Group decided to expand its real estate activities to the US market, and it acquired the legendary Chrysler Building in New York.

About ARE Austrian Real Estate GmbH

ARE Austrian Real Estate GmbH, ARE for short, has been operating since January of 2013 and is one of Austria’s largest real estate owners. Its portfolio comprises 558 office, residential and commercial properties with around 1.7 million m2 of rentable space. The market value of the portfolio is around 2.8 billion euro. ARE buys, develops and lets prime locations throughout all of Austria.