Wolfsburg: district of the future to become a reality in Wolfsburg’s Nordkopf area

- Joint development project between SIGNA and Wolfsburg AG in cooperation with the City of Wolfsburg and the Volkswagen Group
- Forward-looking mix combining retail shops, leisure amenities, offices, hotels, residential living and other uses
- Wolfsburg is setting the trend in modern urban development to provide a competitive environment for attracting additional talent and companies 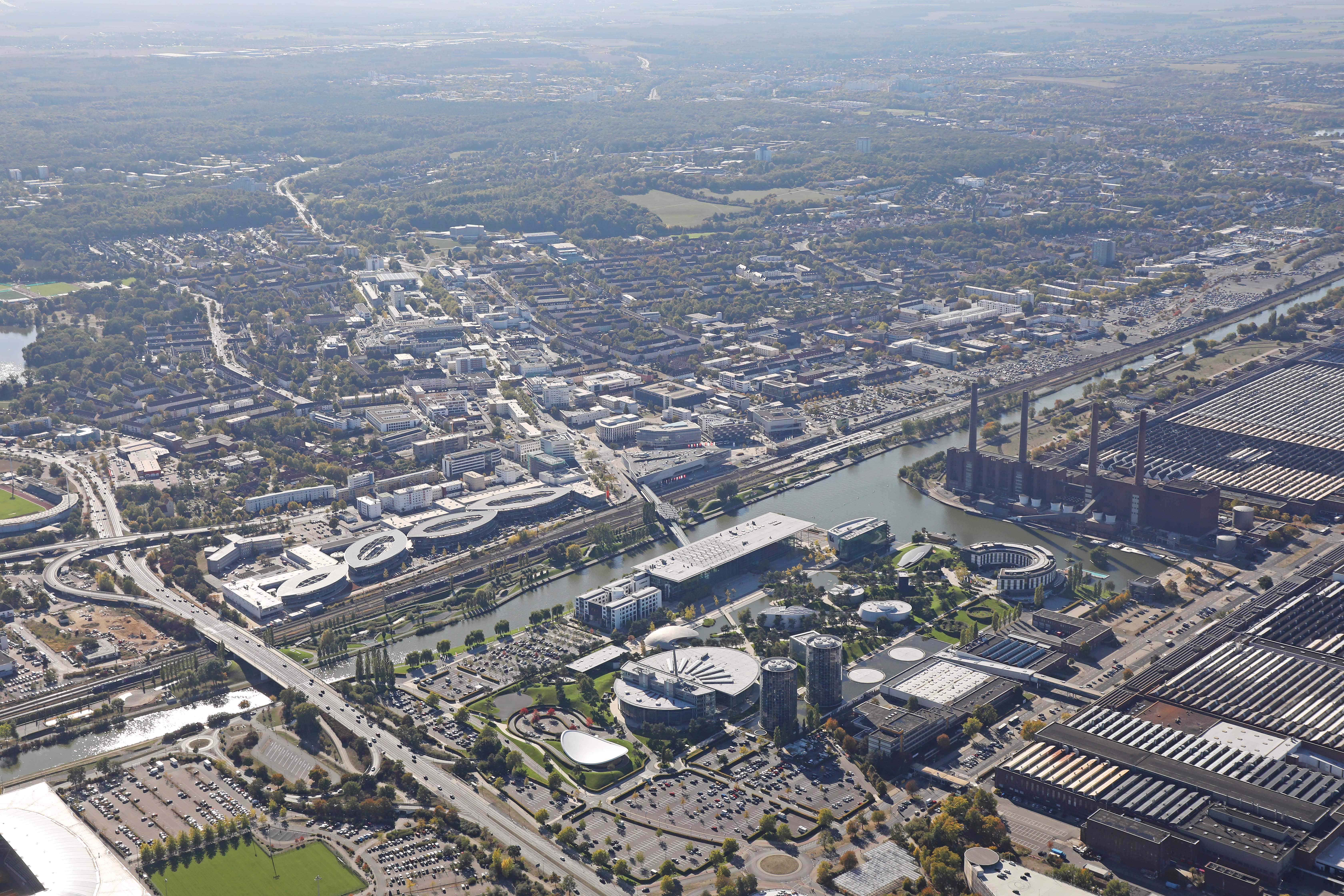 Wolfsburg, 27 March 2019. A connected, future-ready, liveable urban core – that’s the vision for the city of Wolfsburg’s Nordkopf district. The development project is now picking up speed. The plans for the inner city areas to the south and the west of the Wolfsburg train station will be designed by the SIGNA Group, which has been signed as an investor and a project developer for the entire area. The Austrian SIGNA Group and Wolfsburg AG are concluding a project development agreement for this purpose. The next step for the project partners will be to develop an overall concept to be put to the Wolfsburg City Council and all other involved parties for approval.

Plans for Wolfsburg’s Nordkopf district follow a clear vision for a city of the future. The new urban district will integrate office and residential spaces, leisure amenities, retail shops, hotels and restaurants as well as mobility and digital solutions.

Klaus Mohrs, Lord Mayor of the City of Wolfsburg, talks about the new district’s considerable advantages for the city: “More urbanity and liveable digitalisation in combination with a resident- and visitor-friendly face of the pioneering city of Wolfsburg – this is what we hope to achieve with the redesign of the Nordkopf district. Starting with the benefits to the city core, including Porsche Street, the impact of the project will spread to neighbouring districts and ultimately to all of Wolfsburg. The revamped city district will bridge the gap between the city and the Volkswagen plant and will perfectly complement our existing strengths. In the future, our pride in Wolfsburg will not only be based on it being a green city with a strong economy. We will also have a new urban face that will pave the way into the future.”

The SIGNA Group demonstrated in the project negotiations that it is the right partner to develop the concept in all of its various aspects, ranging from office space and leisure amenities all the way to mobility planning. The SIGNA Group is known for its investments in urban development and landmarks such as the KaDeWe department store and the UPPER WEST tower in Berlin, the Alsterhaus department store and the Alsterarkaden shopping arcades in Hamburg and, most recently, the Chrysler Building in New York. The plans are being drafted in accordance with the overall strategy put forward in the #WolfsburgDigital initiative, which focuses on innovative urban planning and sustainable living and includes the master planning for the Nordhof axis in addition to developing the Nordkopf district.

The city of Wolfsburg, which has evolved quite successfully in recent years, will get a major boost from the Nordkopf district project. The project area encompasses the train station in the north of the city, the former Hertie department store area in the south and the adjacent areas to the west. The idea is to create new anchor points to complement Wolfsburg’s existing draws, such as the phaeno science centre and the city’s designer outlets, in the form of office and residential spaces, retail shops, leisure and gastronomy offers and overnight accommodations as well as new ways of working and mobile and digital solutions.

Gunnar Kilian, member of the Board of Management of Wolfsburg AG and Member of the Board of Management of Volkswagen AG, with functional responsibility for Human Resources and Organization says, “Nordkopf is of great significance to Wolfsburg and the entire inner city. It is centrally located, includes the train station as a key arrival point for many visitors and will establish a close link between the city core and Volkswagen headquarters. Nordkopf is a focal point of the city and Wolfsburg’s calling card when competing with other attractive locations. That’s why it needs charisma, and this is surely a one-time opportunity to create such a space in the heart of a city. Our goal is to turn Nordkopf into a modern, future-proof and liveable district where people can work, live, shop and spend their free time. This will also benefit Volkswagen by making the company more attractive as an employer. The designs presented by the SIGNA Group and its reference projects in other cities are convincing. We therefore welcome this next step in the development of the city of Wolfsburg.”

“We are convinced of the value of Wolfsburg’s vision of becoming a liveable city of the future that allows residents and visitors alike to participate in modern solutions in all areas of life. We will be contributing our high levels of expertise gained in renowned real estate projects and major development initiatives in Germany, Austria and South Tyrol to help design and develop a vision for Wolfsburg,” says Timo Herzberg, member of the SIGNA Executive Board.

Manfred Günterberg, member of the Board of Wolfsburg AG, comments, “We’re proud to have gained an extremely successful real estate developer and investor such as SIGNA, which also has a high level of retail competency, for Wolfsburg. After finalising the project development agreement, we will be working together to prepare an in-depth concept and feasibility study. This will involve detailed contextual, financial and also legal considerations.” The planning process is expected to take two to three years. A more precise schedule can be set once the concept and feasibility study is completed.

Wolfsburg to become a city of the future

The world has entered an “urban millennium” according to Kofi Annan, former General Secretary of the United Nations. At the end of 2018, three-fourths of all people in Germany were living in cities. By 2050, this figure will rise to nearly 90 percent according to estimates. Cities and metropolitan areas will have to overcome a variety of challenges, including staying competitive, creating housing, managing traffic, energy and climate issues and dealing with an ageing society. The solutions to these problems will need to evolve primarily in urban areas. That’s why renovation and modernisation are the main focus of German cities, which are already 90 percent developed. The project partners therefore aim to make their vision of creating a sustainable, liveable urban city core in Wolfsburg a reality.

Urbanity for the city of the future

The key to success lies in the flexible “mixed-use” concept that merges options for housing, living and working. The “urban renaissance” is the result of economic and social developments that include the network economy, which thrives in urban, connected spaces. This also means that the functional separation of locations by use type is losing significance. Short pathways are the crucial factor. That’s why it’s important to combine as many different use types as possible in a single location: living, working, shopping, cafés and restaurants and leisure amenities. Today’s development projects offer a wide variety of options for a harmonious mix of living and working opportunities. Realising this concept in Wolfsburg is the goal of all project partners in order to attract young talent, skilled personnel, companies and investors to the city.

About the city of Wolfsburg

Wolfsburg is only just over 80 years old, making it one of Germany’s youngest major cities. In its short history, Wolfsburg has evolved into a liveable city and an important economic centre together with the Volkswagen Group. Wolfsburg is consistently ranked as one of Germany’s economically strongest, most dynamic cities. It is currently enjoying record employment levels with a total workforce of 120,757 people registered to pay social security contributions out of a total population of 125,408 (31 December 2018). To offer attractive housing options to the city’s more than 78,000 commuters, Wolfsburg has been running a housing construction initiative since 2012. At least 10,000 new residential units are planned to be built by 2025. Wolfsburg moreover offers an enormous range of leisure activities for a city of its size with facilities such as the phaeno science centre, the Scharoun theatre, the Wolfsburg Art Museum, the Autostadt automotive theme park and the Allerpark with its beach, high ropes course, Volkswagen Arena, ice skating rink and the BadeLand water fun park. The focus on a high level of quality leisure time can also be seen in the “green city” motto for city planning. Nearly 30 percent of the total urban area is still covered by forests and recreational areas.

Founded by businessman René Benko in 1999, the SIGNA Group is a privately managed holding company operating in the real estate, retail and media sectors. With real estate assets of over EUR 14 billion and an additional development volume of around EUR 9 billion, SIGNA is one of the biggest real estate investors and project developers in Europe. The company controls renowned retail enterprises employing approximately 45,000 persons and generating revenue of more than EUR 8.5 billion – some EUR 750 million in the online area alone.

The SIGNA Real Estate Group is among the biggest real estate investors in major European cities such as Berlin, Hamburg, Munich and Vienna. It owns numerous landmark buildings in prime areas, including the KaDeWe department store and the UPPER WEST Tower in Berlin, the Goldenes Quartier with the Park Hyatt Hotel in Vienna, the Alte Akademie in Munich, the Alsterhaus department store and the Alsterarkaden shopping arcade in Hamburg and the recently added Chrysler Building in New York. SIGNA Real Estate employs approximately 350 people at ten sites in Austria, Germany, Italy and Switzerland.

At present, more than 500,000 m2 of office space, more than 6,400 apartments and more than 310,000 m2 of retail space and eight hotels are being developed in Munich, Vienna, Hamburg and other cities in German-speaking cities. SIGNA Real Estate is working closely with the respective cities to ensure sustainable urban development, forward-looking use concepts and unique architectural features, often in cooperation with international star architects such as Sir David Chipperfield, Renzo Piano, Rem Koolhaas and Richard Meier.

Founded in 1999, Wolfsburg AG is a public-private partnership between the city of Wolfsburg and Volkswagen AG. It aims to provide for a competitive, innovative environment and a sustainable evolution of structures, to raise quality of life and to secure jobs to support Wolfsburg as a business location. It does this by promoting company formations and relocations, forward-looking pilot projects in selected fields and coordinating industry networking.

Wolfsburg AG has thus far overseen 670 company formations and relocations, brought approximately 200 automotive suppliers to the city and either directly or indirectly created approximately 18,000 jobs. Its real estate holdings include the Forum AutoVision, the Volkswagen Arena, the AOK Stadium and the Open Hybrid LabFactory in Wolfsburg.

The Adventure World master plan created in 2000 under the leadership of Wolfsburg AG represented a milestone in integrated urban development in Wolfsburg. It formed the basis for developing the Allerpark, among other things. The large, public recreational area consisting of some 130 hectares offering numerous leisure and recreational activities now draws more than three million visitors each year. Wolfsburg AG was responsible for project development, investor acquisition and marketing.